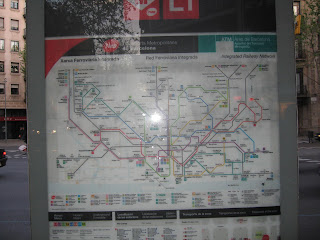 Having recently told you about how you shouldn't get around Barcelona (see here) it is only fair that the BigBarcelonaBlog tells you how you should.

First and most importantly, you should use your feet. For the benefit of my readers from the United States I should point out that your feet are the things on the end of your legs that you usually keep on the couch. More than any other city the BigBarcelonaBlog has visited, Barcelona responds best to being walked around. There is simply no other way to experience the ridiculously narrow alleys of the old Jewish quarter in Barri Gotico (I mean, I say, quarter but whichever person who did the naming obviously flunked fractions at high school). The Old Jewish Sixteenth would be a much better description. Nor can you find another way to explore the surprisingly quiet and romantic streets above the Picasso museum in El Borne. Nor can you express your inner hipster in Gracia or your outer gangster in the Raval. Walk and walk and walk and if in doubt walk some more. This is the most valuable bit of advice I can give you.

Oh apart from remember to look the right way when crossing the road. That is even more important. Because Spain, like every Latin country in the world, has instituted driving laws which are simply poorly camouflaged attemtps to cull the world's population of innocent Celts and Anglo-Saxons. You think they're still not smarting from the Armada going pear-shaped? Think again.


However, the BigBarcelonaBlog must acknowledge that there comes a time when ones feet are not enough. I'm again particularly thinking here of my readers from the Land of the Free who after a few hours of walking will doubtless  already have large pustular-like blisters forming on their too, too soft flesh (I have one word for you. That word is micropore tape. Damn, I have two words for you.) We would not want our unquiet American friends to suffer the indignity of being diagnosed with a strange new strain of pediatric Bubonic plague and hence be forced to experience what a proper health system feels like, as the whole idea of universal care seems to bring the whole country out in hives which, ironically, at least half of them don't have the insurance to get treated.


It could also be that you have read other articles from the BigBarcelonaBlog about, say, Parc Guell (here) or the Sagrada Familia (here) or Montjuic (here) or Gracia (not here cause I haven't written it) and thought I must make my way to these tempting sounding spots to see if the reality can live up to the prose.


Move your eyes away from the Tour Bus which sits temptingly at the top of the Las Ramblas. True it will take you to all these places but it will take your soul at the same time. And a soul is going to come in handy one of these days. Just ask the pope. Or Sam & Dave


Instead gird your loins (a fantastic piece of advice I think you'll agree and one all too often, scandolously overlooked in these lax modern days. How many of us, I wonder, are sauntering through the streets with ungirded loins?) Head for the nearest metro station  – here's one I photgraphed earlier and they all look pretty much the same – and take the plunge into the unknown. 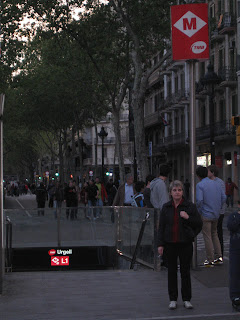 But BigBarcelonaBlog, I hear you protest, - they'll speak Spanish to me or even, perish the thought, Catalan. Fear not oh subterranean explorer for I have prepared you for such eventualities with my blog about learning to speak Spanish using only fifty words (here) and Catalan in only five words (here).


And anyway you won't have to speak to anyone. Simply approach a ticket machine. It will look like this. 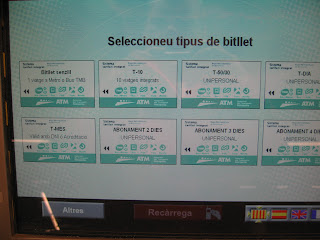 On closer inspection you will see you are being offered 8 options. If you click on the Union Jack you can be offered them in English. You want a T-10 – if you squint you can see it there on the top level second from the left. Touch the screen to select it and then put your money in the slot on the right (it's about 10 Euros at the moment). You are now the proud owner of ten metro journeys.


An important thing to know is that the cards can be used by more than one person at the same time. After you've put it through the machine and passed through the whooshing door (OK whoosh is an exagerration – juddering clunk is more accurate) all the other people you want to use it have to do the same (one swoop per person). That's all there is to it. It's incredibly well-signposted so if you know where you're going you shouldn't have any trouble.


The ticket technically only covers Zone 1 but as Zone 1 is so wide that it reaches practically to Madrid that shouldn't concern you very much. Which speaks volumes for the value of the ticket (in London Zone 1 stretches about as far as Boris Johnson's floppy hair). The trains come very regularly. Admittedly they can be crowded in the centre and especially at rush hour but nothing too bad. The last metro on weekdays and Sundays goes at 12, it's 2 on Friday and they run all night on Saturday and the nights before public holidays.


There are a couple of drawbacks. First, pickpockets. They are there and will pounce on an unwatched open bag but if you keep your stuff closed and in front of you you should be fine. The horror stories of Barcelona pickpockets, whilst not entirely untrue, are certainly considerably exaggerated. Do, however, be especially alert if a crowded escalator you are riding up suddenly comes to a stop. This is a well know chaos causing technique and there is a very good chance someone is about to lose their wallet. Try not to let it be you.


And the other drawback. Buskers. There is no easy way to say this but Barcelona has possibly the  poorest quality buskers in the entire world combining the five big no nos of busking in one extremely resistable package, In no particular order, these are:


1)    Intrusion and Pursuit – rather than strumming Knocking on Heaven's Door dolefully in the tunnel like the British buskers I grew up with, Spanish buskers come into the carriage to play for you.


2)    Amplification – oh yes. Each busker has their own personal generator.


3)    Tinny backing track – the buskers may attempt to play different songs over it but I swear the backing track is always the same.


5)    Accordions. I really hate the accordion.


But apart from that what's not to like? It's cheap, it's fast and it's reliable. And, though I find it hard to believe, there may be some of you out there who even like accordions.

Posted by BarcelonaBuzz at 21:06 No comments:

Email ThisBlogThis!Share to TwitterShare to FacebookShare to Pinterest
Labels: Barcelona, Getting Around
Older Posts Home
Subscribe to: Posts (Atom)

My Other Blog of Random Stuff 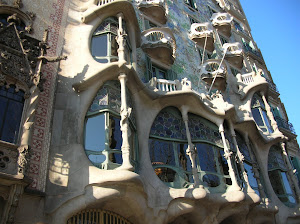 The Weather in Barcelona